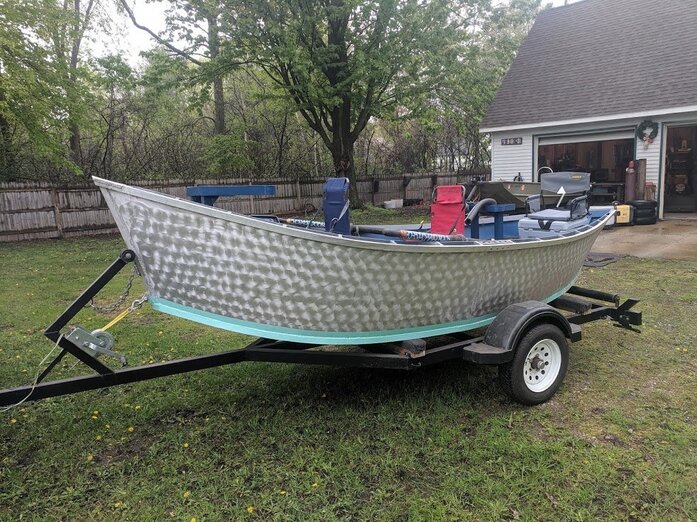 Think of aluminum as a special hotrod version of plywood--and weld it at the edges instead of guiing it.

A stack of these random-length 2" inch by 1/4" inch ash strips can be (will be) glued together to make an extra-thick extra-stiff extra-stout gunwale. It is so much easier than steaming. And far far stronger too. This is the GOAT gunwale.

I made these strips yesterday. This will be my fourth boat with gluelam gunwales. In the past I've used epoxy as the bonding agent, which is not only expensive it's a sticky mess to work with. Tightbond III is the glue of choice for bonding purposes. Epoxy is for laminating fabric only.

After thirty years of making wood/fiberglass stitch and glue and all fiberglass boats I'm gradually moving back to all wood. Or mostly wood. This one has a fiberglass bottom and will have all wood above the bottom shoe. This will be a big decked white water boat. 66" inches wide on the bottom. 8' across the oar locks. 18' foot side panels makes and end-to-end length a tad less than 17' feet long. 30 degree side flare without too much rocker.

I thought about calling it the San Wanderer. But it's a Whale Rider. A boat this wide will float in just a few inches of water, which will make it turn on a dime. As a well-rockered boat with a up-curved transom it will be easy to slow down. And just as easy to jump forward when pushing on the oars.

Above is an all-fiberglass Dayak I built over a simple one-off male mold. With fiberglass or with glass over plywood you don't have to be much of a wood worker. It all gets covered in glass and painted anyway.

Now I'm making a big decked Grand Canyon Dory that's all wood except the bottom,and 8" inches up the chine. Fiberglass bottom. Wooden top. Fun stuff. The main purpose of this boat is to keep me interested. I can't do the same thing more than twice and then I have to move on.

With wood you have to go slowly and get it right. A sixteenth of an inch gap looks bad. It's OK. I can do it. But it does take time.

The Whale Rider is an experimental boat with fiberglass bottom and wooden top. This will be a big decked white water dory.

Are models worth much? Yes. You bet. At least if you are trying to design a completely new hull shape.

I used to make dory models with formica, which bends well without distorting. But the lumber yards don't have formica scraps any more. You have to order a 12' foot piece to get any at all. 1/6th scale is handy, where an 18' foot boat is a 36" inch model.

If you are painstakingly fastidious with measurements and cutting a good looking model can get you fairly close to full size working dimensions. But they'll still be too far off to actually build with. I usually start with a plastic model and then jump to a full size model, made with plywood side panels and adjustable rib like formers. Then I fiddle with widths and side angles until it looks right. And then glass it up.

3D software like FreeShip may replace the plastic model step. I'll find time for that soon. This model tells me 30 degrees side flare with a straight line chine makes waaay too much rocker.

If you warp the side panels a bit by having wide flare in the middle and less side flare at the ends, and if you dish out the chine some so the chine edge is a curve instead of a striaght line, and (if you possibly) widen the transom a bit too, you can reduce rocker as much as you want. Dishing out the chine a lot does (unfortunately) mean you have to make a separate side panel for each side, at least if you want more than 20" inches of side panel height at the oar locks. Keeping width in the middle for as far out as possible, in both directions, and then bending in sharply as close to the ends as possible also helps reduce rocker.

The final gnat's ass dimensions still have to come from adjusting and experimenting with a full size model. I like making these small scale models as a first step. It's fun. But I still end up disappointed about how much they tell me. A full size (adjustable everything) model, on the other hand, tells you exactly what you want to know.

Treatise on Driftboat Building for an Angler The following started off as an email conversation between Roger Fletcher and me. Roger suggested turning it into a web page. That seemed like a good idea. So here it is. I started off building framed boats in 1979. My first boat was built from plans I bought from an ad in the back of Field and Stream, from a guy in Fernwood Washington. My buddy's all called that boat Sandy's Lead Sled. It was so flat bottomed you couldn't keep the transom out of the water, so it was impossible to slow down. The next few boats I built were inspired by Keith Steele's great boats. The handling and performance of my boats got better over time, but I was dissappointed when I saw what happened to fir plywood that had paint or varnish on it. I read something about Instant Boats by Dynamite Payson and a light went on. "I can build driftboats that way" I said to myself. I made a boat with temporary and removable ribs. I duct taped small pieces of visqueen to the temporary rib-chine corners, so they wouldn't stick to the glue. And I eliminated the inside chine strip. Then I turned the boat over (still with no bottom on it). I straighted up the form (sides attached to temporary ribs) and layed the square bottom panel over top, traced out the sides and then cut it out, and then attached it. I used bailing wire and epoxy putty to stitch the sides to the bottom panel. I removed the bailing wire with a soldering iron (to heat the wire, so it pulled from the glue). Then I removed the temporary ribs and fiberglassed the inside. I added gunwales and seats and voila: I had a lighter boat. There were no ribs. It was 'encased' or 'encapsulated' in fiberglass, so the fir plywood didn't split and crack. The fiberglass was a thin, transparent layer so it still looked like a wooden boat. The term stitch-and-glue wasn't happening then, so I called them 'ribless boats.' This technique can be applied to any framed dory. You can start with plans for a framed dory and apply those techniques instead. Take your pick. It's a construction technique decision. There is no framed boat that cannot be built as stitch and glue. The layout and sizing dimensions for the permanent ribs of a framed boat simply become temporary formers on a stitch and glue setup. In 1986 I was feeling frustrated by the sizing constraints of 4x8 plywood. I read about balsa core sandwich layups for racing sailboats. Balsa could be pieced together to form any size panel. So I made a balsa-core boat (the Honky Dory) that had a 56" bottom. Balsa turned out to be a good-news bad-news idea. Balsa core does build a very light weight boat, but you do have to fix fiberglass cuts almost right away, because balsa core does soak up water and fiberglass does get nicked. So balsa core turned out to be less than perfect, but wide bottomed boats turned out to be a revelation. Wide bottomed boats float in shallower water and they are a lot more stable. Then it dawned on me that 48" plywood wasn't a design constraint after all. If you can scarf plywood to make it longer you can scarf it to make it wider. Epoxy is handy, but the old resorcinol glues they used in the 1950s can be used for scarfing too. People just weren't doing it. 16 and 17 foot boats still had 48" bottoms. I was the first one I know of--in 1986--to build a 15' boat with an extra-wide bottom. Now others are starting to build that way too. Narrow Tails The early Oregon boats where all designed for passengers up front, with no one behind the rower. The boats in Roger Fletcher's wonderful book all reflect that. Not only are there no seats in back, those boats are all a bit narrower in the tail too. They didn't need to be wide in the tail because they weren't meant to carry much weight back there. But starting in the early 1980s fly fishing became popular, and you do have to put a guy behind the rower if you want two fly fishermen to cast at the same time. The early Oregon boats just don't work well that way. If you put a passenger in the back of a Keith Steele boat you turn a highly-tuned hotrod into a half-sunken water melon. Boats like that drop down at the transom and rear up in front like a pregnant whale. If you want to fish a rear passenger you have to make structural changes. The MRB Beavertail is dead symmetrical on the bottom: the rear end is as wide as the front. That way you can place a fisherman behind the rower and the boat still trims well. Thousands of Northwest coast driftboats have been built that do not trim well at all with that rear-positioned fisherman. And yet that is how a growing number of drifters do now use their boats. In other words, if you want to make a fly fishing boat, forget about 98% of all driftboat hull designs. You have to make a hull that has a symmetrical bottom, where the upstream end of the boat has enough buoyancy to support the rear-positioned fisherman. Or--like the Honky Dory--you can to make a more traditionally-shaped hull with adjustable seating and an extra-short front deck, so you can move all three passengers further forward. The honky dory works both ways. You can put two passengers steelhead-style on the front seat (with no one behind the rower) or you can put a rear-positioned fisherman in the boat. It still works because the payload is all shifted further forward.

This was my first stab at a one man boat. I basically scaled down a Buffalo Boat so it was made with one sheet of plywood for the side panels. It was only abou 36" inches wide on the bottom. It rowed surprisingly well once you got into it. Bui after falling on my wet butt a few dozen times trying to get into it and out of it I took my Sawzall to it.

"The next one will be wider, lower and decked," I said to myself. And then the Dayak happened.