(MRBHome)/Drift-boat-info/Grand-Canyon
Jeremy Christensen and Larry Hedrick sent me these photos, taken in March 2010 in the Grand Canyon. Jeremy and Larry both built their own Honky Dories, modified as decked white water boats. Pretty cool stuff. The Montana Riverboats Honky Dory is not a Grand Canyon dory and was never meant to be. It's a bit too small. But it is a testament to the boat in general--that two of them made it through without misshap. If I wanted to build a big water boat I'd scale the HD up to 17' long, so it had a 60" or so wide bottom. I'd increase the side height and give it a bit more side flare too. And I'd put the passengers in two rows, immediately in front of the rower, so the overall payload would be closer to the boat's center of gravity. Most Briggs-style boats work with support rafts, so the passengers are the only real payload. But they're too narrow for me and most builders push the passenger seats out to front end rear ends of the boat, which not only makes them harder to turn, it makes them less side-to-side stable too.

Now that I think about it, my discussion of passenger placement in the paragraph above depends on how you use the boat. When Larry and Jeremy and others like them do their own weeks long desert white water trips they are their own outfitters. They have to take hundreds of pounds of food, water, camping equipment and boat repair materials with them. In that context passenger placement doesn't make much difference. You can still do your best to put the bulk of they payload close to center of the boat. But the passengers aren't any heavier than the stuff. Many commercial dory outfitters, on the other hand, work with support rafts, which carry the bulk of the expedition weight. In that context the passengers are nearly the entire payload. And in that case where you put the passengers matters a lot. And putting them out at the ends of the boat is not the right thing to do.

There are a variety of boats here in this collection. But the Carnage and the Desolation are both Honky Dories. The Susie Too is a recreation of an old Keith Steele Dory built by Kyle Frye. The Hellgramite is a modified Tatman boat built by Dave Inskeep. The Carnage is the white boat with the salmon and purple stripes. The Desolation Dory is the blue and green boat. 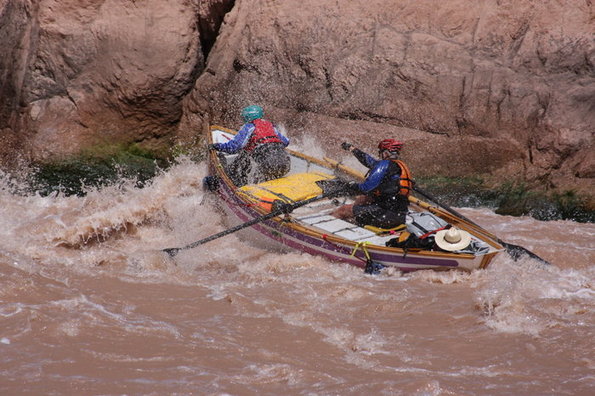