This is the start of a Bill Blackburn collection. I've got some Bill photos somewhere. But I haven't found them yet.
Bill is a top-knotch bamboo 1 rod maker, fly tier and fishing guide. X-fishing guide anyway. 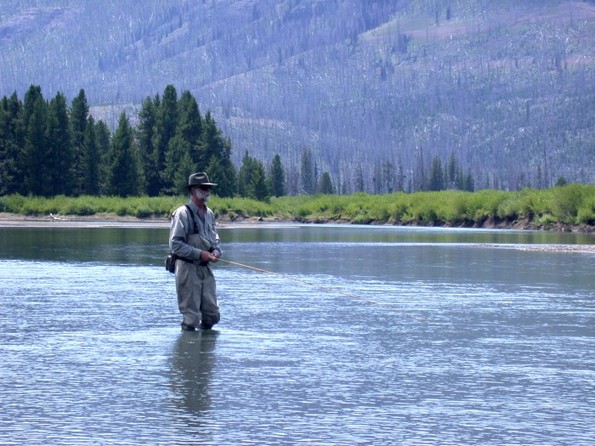 One of the most interesting photos here is Bill's Taiman fly. Bill spent several seasons over there in Mongolia. And he did catch a 57" Taiman at one point. This fly is about 5" long, and Bill described it as " small " for a Taiman fly.

I and a lot of other tiers I know always seem to have two audiences in mind: fish and fishermen, where fishermen really means "publications." It's fun and rewarding to get recognition for your efforts. So I don't denegrate that impluse. I tie that way. I put my flies on the internet and I (occasionally) try to write articles about them for publication in magazines. I have no regrets. That's what I do. But I'd be a liar if I said that implulse didn't influence the way I design and tie flies.

Other tiers I know neither care nor in any way think about that kind of thing. They tie flies to fish with and that's it. Bill is like that: his flies are influenced only by fish and fishing. You can see it in his work. I almost randomly chose about 40 of Bill's patterns to photograph here....from a box of several thousand flies. What follows is a snapshot of a flybox that evolved over 30 or 40 years, from West Yellowstone to Alaska to Mongolia and then back to Montana again.

One final note: Bill Blackburn ties a lot of Thunder Creek Minnows. At least he used to, because he sure does keep a lot of them in his working fly boxes. One interesting thing: Bill told me he "has the most success" with small ones. I didn't ask Bill specifically, but a lot of the little Keith Fulsher minnows he ties are well under an inch long. Now that is interesting. It's not often you see streamers of any kind tied that small.