(MRBHome)/Flies/Bob-Jacklin
I (Sandy) went to Bob's shop in West Yellowstone on Memmorial Day, 2005. I asked Bob how many flies in his long line of bins he actually tied. I was dissapointed when he told me his highly regarded Salmon Fly adults were the only flies he still commercially tied. Bob currently charges about four bucks a piece for these flies and he still can't tie them fast enough.

I did buy a half a dozen of his impressive Salmon Flies. I also went to a Bob Jacklin fly tying demonstation at the Bozeman Angler about a year ago. At the end of his show Bob took requests from the audience for a while. There wasn't a fly anybody could think of that Bob couldn't tie just like that, and each one came right off the vise as a presentation quality fly. I can do that too, sort of, but it takes me a about a half a dozen tries at each new pattern before I even start to get a good-looking fly. Bob can do it the first time, everytime, for any pattern anybody ever heard of. It was quite a demonstration. 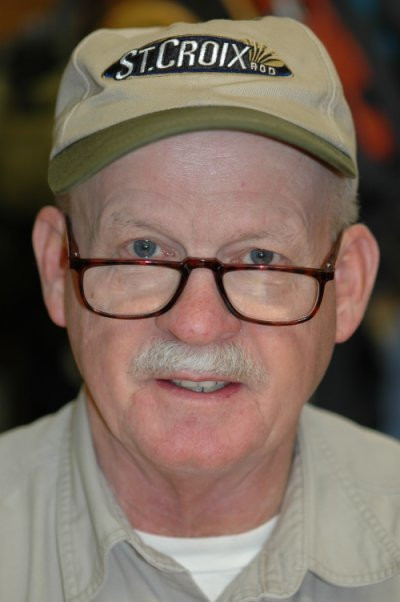 I've seen a lot of those Saturday afternoon fly tying shows, here in Bozeman, during March and April. The two best shows I've seen yet were Al Troth (about ten years ago) and Bob. It took some coaxing, but I did finally get Bob to agree to tie this signature collection for me. I have to finish a boat first. Then I'll build a series of mahogany shadow boxes, for all the flies in these collections: Bob, Al Troth, Pat Barnes, etc.

2006-04-08 Now a year later--I just saw Bob do another fly tying show. This time at the Bozeman Troutfitters store. Wow. I've been going to a lot of these shows this spring. They're all good. But nobody ties as fast and as accurately as Bob. It's not just the accuracy, it's the speed and quality. Amazing.

This time I noticed Bob almost always ties a bit of dubbing onto the rear end of the hook first, before mounting the tails. Then he mounts the tails. The dubbing makes it easier to spread the fibers and position them however you want. Good stuff.

I also noticed that for all nymphs and dryflies, that have ribbing of any kind, Bob winds one wrap of body dubbing underneath and behind the ribbing, before winding the dubbing forward. Then the ribbing seems to dissapear into the body, at the rear end of the fly. Nice touch.

I also noticed Bob use a peacock herl technique I've never seen before. In order to make the green body of a medium sized green drake nymph, Bob got four peacock herl strands tangled into a dubbing loop. Then he spun the dubbing loop to make what looked like a yarn strand, made from herl. And then wound that. Also a nice technique.

Bob made quite a few nymphs with dubbed bodies overlayed with flat vinyl ribbing, where he wound the ribbing so tightly it ended up looking like the dubbing was the ribbing. Note the "March Brown" link at screen top-left. To finish off his stonefly nymphs he brushed the underside of the dubbed thorax with a soft brass-bristle brush. Brass brushing the body pulls the dubbing out sideways, finishing off the fly nicely.

At the end of his show Bob made a little tickets-out-of-a-cigar-box lottery for everybody who stayed until the end of the show. I won a copy of his latest tying DVD plus a March Brown Nymph. Now that was an an afternoon well spent.
Slideshow
index.htm