Chester Marion drowned Aug 7, 2011 in an unlikely rafting accident. Chester was 73 years old. He and a friend were drifting the lower Boulder River, near Big Timber, when they unexpectedly encountered a freshly-fallen cottonwood tree. The raft and both passengers were sucked under a log jamb and banged up pretty badly. Chester will be both missed and long remembered by the local SW Montana fly fishing community. Obiturary 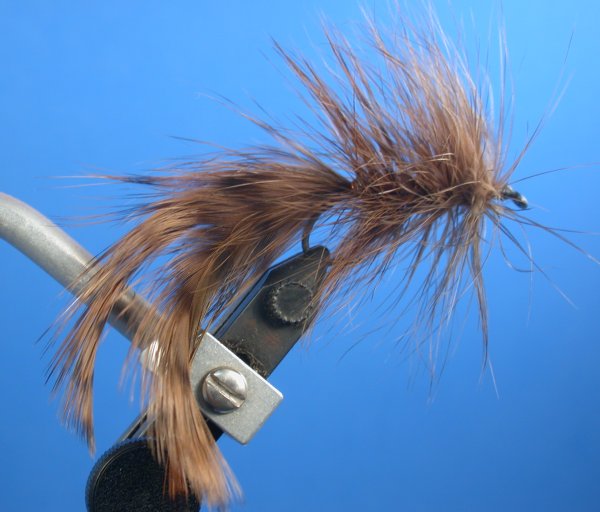 This fly was tied by Todd Wester (fly tier and top-of-the-line Paradise Valley fishing guide), not Chester Marion. It's the best I can do so far. The Marion Sculpin is a very good fly. I don't know Chester Marion and I've never met him. But I've sure heard a lot about the guy. Chester was one of Dan Bailey's first and best guides, way back when. Chester more or less invented winter-time midge fishing, with flies he called "snow flies." I know that because of an old Dan Bailey's catalog I've got somewhere that said that much. Chester Marion is famous for catching giant brown trout on his Marion Sculpin. Todd Wester gave me this fly about ten years ago when we both worked for George Anderson at the Yellowstone Angler. Todd called this fly the "Marion Sculpin" ...so I saved it instead of fishing with it. I watched Todd catch a fat 20" brown on a similar fly one October day on the Missouri, a few years back. Chuck Tuschmidt and I were fishing itty bitty Blue Winged Olives, while Todd was working harder and with more determination, dredging a deep run with a shooting head and a Marion Sculpin. You can catch 20" fish on Blue Winged Olives too, if you keep at it long enough. But you're a lot more likely to catch one on a sculpin fly.
Slideshow
index.htm