These are some Permit flies, tied by George, that I got from Jamie Anderson. This is all I've got right now. George is a great guy and a great fisherman fly tier and boss too. The years I worked out of George's Yellowstone Angler were the highlight of my fisherman's career.

These are impressive flies. Jamie said George called from Florida earlier in the day; said George caught a 180 pound tarpon. Son of a gun. I spent the day on O'Hairs. It's hard to complain about a day on the spring creek, but I'd trade it for Florida tarpon fishing anytime.
Crab-4 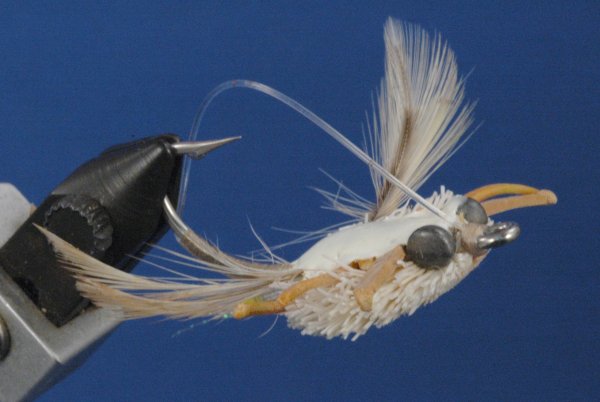 I think this fly is called the McCrab. I'll verify that at some point. If I can't get anymore real tied-by-George flies, by George, I'll have to break the rules a little and put some store-bought facimilies here instead. What flybox would be complete without a George's Brownstone? The Brownstone is one fly I make sure I always have.

I watched George tie stonefly nymphs once. I can't remember where. Was it part of a show, perhaps at the Gallatin County Fair Grounds, or maybe an FFF Conclave? George is a big guy: his fingers are like red freckled bananas: so big it's hard to see what's going on behind his hands. But his fly tying skills are fast precise and professional. As I watched those beautifully tied and propotioned nymphs fall of his vise, I knew I was witnessing something special.

Years ago, before I started working for George, during a rare low-water year when the Salmon flies hatched in clear water on the Yellowstone, even as far downstream as Livingston, I remember taking a boat out at Carter's bridge one evening. The fishing had been OK but not great. The few good fish we caught were bloated with salmon flies; many of them regurgitated golf ball sized globs of flies as we released them. George was about to start an evening float with some customers. He asked me how the fishing had been. "Ok," I said. "But they're so bloated with flies they're hard to catch. I think we should have gone further upstream." George looked annoyed. He strung up a rod while I was loading up my boat. George caught two or three fish at the put in, drifting nymphs, before I even got out of the parking lot.
Slideshow
index.htm