(MRBHome)/Flies/John-Betts
Someone sent me this fly so long ago (mid 80' s I think) I can't remember the circumstances. I think it may have grown out of a reference I made to his Frog Wiggler in something I wrote. I forgot I even had this fly until I discovered it, languishing in a box of Pat Barnes flies.
Betts-Baetis 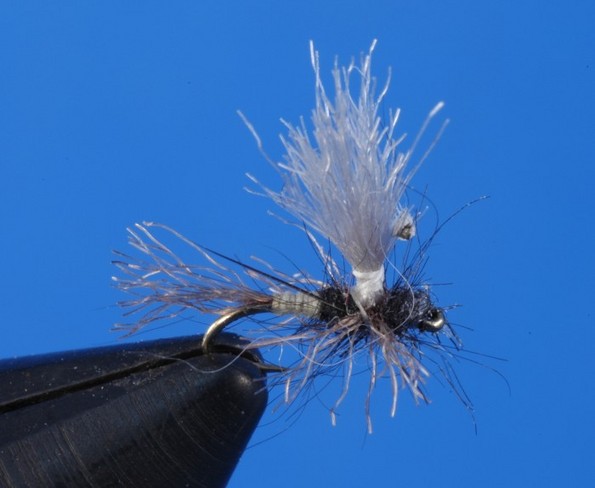 This fly looks a bit like a standard parachute Baetis, due to its pale dun-colored post wing. But instead of a parachute hackle, this fly has a horizontally splayed tuft of dun-colored synthetic fibers in the bottom side of the fly. Is that Zelon, or what? I looked on Amazon dot com to see if John ever published a book. I found one copy of "Catch the Hatch" by John Betts for sale, used for almost $200. I wanted the book, but not quite $200 worth.

Hold the phone. I remember now. It wasn't John it was a friend of Johns's, perhaps a neighbor who sent me this fly back in the mid to late 1980s. Back in the daze.
Slideshow
index.htm