(These are Skip's flies. This is his Polly Rosoborough Fly Collection)

After moving to Oregon in 1958 I was eager to make connections with other fly fishermen, especially fly tiers. John Kolzer was locally known on the McKenzie for his high floating "Kolzer Caddis" and I looked him up at my first opportunity and spent a pleasant afternoon with him in 1959 at his fly tying bench overlooking the upper McKenzie River. I had read about both Kolzer and Polly Rosborough in a book by Eugene Burns, Advanced Flyfishing, but it was another year before I was able to get down to Chiloquin to meet Polly. At that time he was living in an old rented house about a long cast from the Williamson River just below town.

At that time I had been tying flies off and on for about twelve years, but in the Eastern or Catskill style. Polly's flies were an astonishing revelation to me. His flies were big, fuzzy, impressionistic and tied on very stout Allcocks sproat hooks. When he told me the size of the trout coming out of the Williamson River I understood why. Unlike many tiers of his day, Polly was never secretive about his methods. I could sit for hours watching him tie and listening to his non-stop exposition on fly tying, fishing, entomology, trapping, prospecting for minerals, and women. I learned a lot from him about how to tie really effective and durable flies for fishing. He greatly expanded my knowledge of materials and how to acquire them at a time when there were few fly shops and no flyfishing magazines. He introduced me to Allcocks hooks which he imported and I learned to prefer them to the generally available Mustads. He started me dyeing my own materials to match the colors he developed for his patterns.

At our first meeting I told Polly I had never before seen flies like his and suggested that he write a book. He said he had thought about it but between fly tying, trapping and rock-hounding he just never seemed to have the time. But I made it a point to remind him regularly that he wasn't getting any younger and if he wanted to leave a legacy for posterity he better get to work on his book. He finally did get around to it and his first edition of Tying and Fishing the Fuzzy Nymphs came out in 1965 as a self-published little softcover manual of 88 pages with the color illustrations of the flies on the cover. Four years later he gave Orvis the rights to publish an expanded and updated edition in hardcover. He was never happy with the publication. The only illustrations of the patterns was on the dustjacket and they are nowhere identified. When he revised and expanded it again in 1978 he had Stackpole publish it and they did a nice job. It is hardbound, 6x8 inches, 192 pages and it goes well beyond the scope of his earlier editions. The black and white illustrations are full page and the color fly plates are inside the front and back covers.

Polly would not sell you or give you a fly. He always told anyone coming to him for flies to go over to the hardware in Chiloquin where they stocked his flies. If you wanted a special order of a substantial number of flies he would take the order but you would be in line behind his regular commercial accounts. So nearly all the flies in my collection were purchased at the hardware store in Chiloquin during the 1960's. I never fished with Polly's flies. I bought them to copy. I used to go down to fish the Williamson at every opportunity and I spent more time with Polly than I spent on the river. After he became widely known through the FFF and his books he could not keep up with his orders. He first went into a partnership with Klamath Falls tier Dick Winter. When that arrangement didn't work out he tried to train various local women to tie his patterns. The late Jerry James, an excellent tier who lived in Medford, tied flies for Polly and even learned to tie left handed to better match his patterns. In his later years Polly stopped tying wholesale orders and just tied custom orders, mostly sets of his nymphs and wet flies for collectors.

Polly Rosborough was a good friend for nearly forty years during a time when fly tying was experiencing exponential growth. He was an influential force in its growth and enjoyed widespread respect among fly fishers and fly tyers who knew him. He was an early winner of the Buz Buszek Memorial Fly Tying Award and in 1985 was recognized by the Washington Fly Fishing Club with the Letcher Lambuth Angling Craftsman Award. He had only about nine years of formal education, but he had an inquisitive mind and was a wide reader. For anyone wanting to know more about this interesting character try and find a copy of his memoirs, Reminiscences From Fifty Years of Flyrodding. 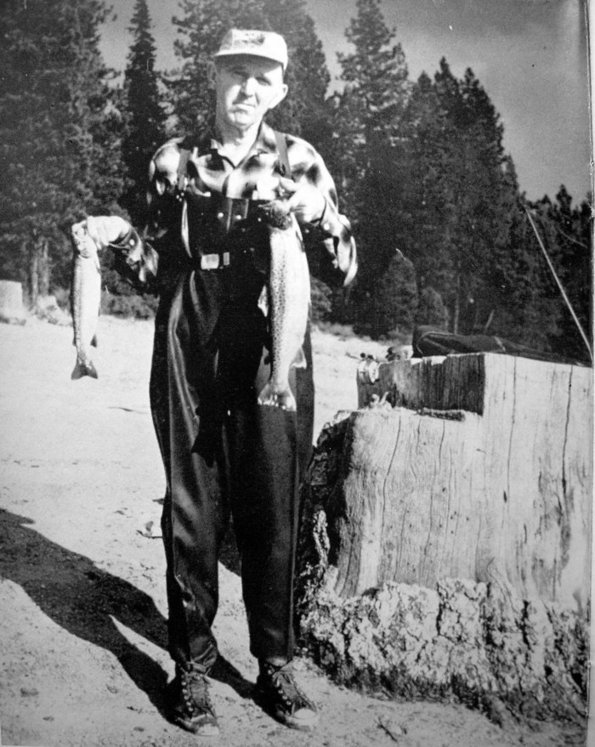