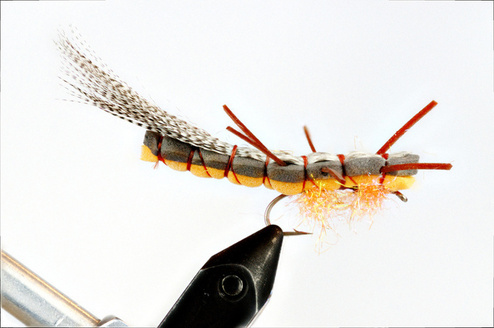 Springtime in the Mountains

The salmon fly hatch in Montana is an annual epidemic of spring fever born of the first warm jubilant rays of sunshine after a long cold mountain winter and a dark windy clammy and cold Montana spring.

The Salmon flies usually start hatching here in Montana, or in Idaho I should say, in the box canyon of the Henry's Fork of the Snake at the end of the first week in June. By the time they fizzle out on the Henry's Fork a week or so later the big flies are already hatching on the Big Hole at Twin Bridges or above. Times and conditions vary as much as a

week or two from year to year. But by the 20th of June the Big Hole hatch has usually reached the old power house at Divide. And the really bad craziness in the Maiden Rock Canyon will have reached its peak.

The Big Hole river is one the most beautiful drainages in north America. It holds some of the biggest trout in the state and it is only about forty miles from Butte Montana--the hard working hard partying home of Evel Kneivel and forty thousand other elk hunting trout fishing hard rock miners and salt-of-the-earth urban cowboys. When the sun is shining and the flies are are hatching on a weekend in June nearly half the populations of Butte, Dillon Ennis, Bozeman and Helena plus a small army of adventurers from California, Texas, Illinois, New York, New Jersey and a Massachusetts are hooting and hollering and drifting down through the Maiden Rock Canyon in or on any thing that stays afloat.

The best strategy, regardless where you plan to fish, is to get on the river early. Camping and sleeping on the bank of the river somewhere near your point of departure might seem like a good plan. But getting any sleep anywhere within two miles of the Divide campground is totally out of the question. Big fat tired four wheel drive pickups with roll bars whip antennae and booming country-western tape decks rumble into the campground all night pulling driftboats and racks of river rafts. They circle through the campground with their bright lights on searching endlessly for one last place to park while kids scream hamburgers sizzle firecrackers bang and morocycles, trail bikes and all terrain vehicles spin donuts and fly in and out of the parking lot doing fourth of July wheel stands. When the first cowboy jitterbuggers turn up their wilderness blasters and start dancing on the picnic tables you might think a blimp full of laughing gas had exploded over a rodeo:
"Cuz I'm a honky tonk maaaayan. EEEEEEEHHHHHHAAAAAaaaaaa! Hey there easy money, git me some beeeer! We are gonna catch us some fish tomarrrow!"

This is springtime in the mountains. The revelry seldom lets up until after two when they shut down the Blue Moon Saloon a mile or so down the road. And even then, for another hour or two thereafter the still chill mountain air will be violated by barking dogs and the rhythmic squeak-swing-slam of the spring loaded outhouse doors. The campgrounds down the road at Brown's Bridge and Glenn are little different. So you're better off to take the old cutoff road to Twin Bridges and pull out on the prairie somewhere to throw out a sleeping bag, somewhere in between the prickly pears.

The next best strategy to getting up earlier than everyone else is to try and figure out where that elusive one or two mile slowly moving section of the river is where the flies are just beginning to hatch, where the fish aren't yet stuffed to the bursting point, and where the frenzied pace of the fishing is supposed to climax in a reckless orgy of slashing, snapping, swirling trout: the head of the hatch. Then, once you've figured out the where the head of the hatch is, you have to decide whether to fish upstream or downstream from the commotion, because the head of the hatch is where eighty to ninety percent of the masses will be. One theory has it that the next three to ten miles upstream of the head of the hatch is the place to be, because the nymphs will on the move there, instinctively moving into the shallows in anticipation of the hatch. And the too will be the anxious trout, lying hungrily in wait. Or so goes the theory. If the upstream fishing doesn't work, another strategy is to fish downstream from the hatch at least ten miles and a day or two from the peak of the action. The trick is to get downstream far enough because the fish will be bloated with flies and absolutely impossible to catch for twenty-forty hours after the hatch has passed on up the river. Perlidae, or golden stoneflies, often hatch simultaneously with big Pteronarcys salmon flies and the fish often seem to prefer the smaller golden stoneflies to the bigger ones. This mysterious preference for the smaller stoneflies is especially noticeable downstream from the head of the hatch.

Any serious angler should also be prepared to fish with streamers during the salmon fly hatch. I remember taking my boat out at Melrose late one summer evening--sun burned and dog tired after three says of guiding on the river--when I encountered my friend Wayne, who was taking creel census number for the Montana Fish and Game Department. Wayne has a strong sense of mischief in his heart, and he was adding to the general mayhem that evening by showing everybody a photograph of a 19lb female brown trout. The fish shocking crews had rolled this fish out a deep hole in the maiden rock canyon only a week before the hatch. And Wayne was telling everybody, as he took their creel counts, that a California fly fisherman had taken that fish on a sofa pillow the day before yesterday.

I knew better however and threatened to turn him into the authorities for inciting to riot if he didn't give me the real scoop. So on a more serious note, Wayne said "Well I'll tell you. The really good fishing has all been down below Brown's bridge. The guides from the Complete Angler have been fishing Bou's down there, and they took and eight pound 27" brown down the just last night. But watch out for that bridge! There isn't enough clearance to get a boat under it, and there's been a dozen boats sunk down there in the past three days!"
Bou's , which are e little more than red and yellow marabou girdle bugs with long, multi colored tails are a long established big Hole tradition.

Last but certainly not least, if you want to joint the great masses of fisherman at the head of the hatch you can fish either with big black nymphs or adult dry fly salmon fly immitations--or both. The action will be the thickest where ever there are willow bushes lining the banks of the river, where small triangular shaped eddies of still water--under the willow branches--are immediately adjacent to deep, medium fast current.

The nymph fishing during the last two weeks leading up the salmon fly hatch has consistently produced the best fly fishing for me over the years. If I had to choose (if I could choose) I'd take the first warm, cloudy but not windy day after a cold snap--on the Big Hole--2 to 3 days before the (salmon) flies begin to hatch. Well, if I could choose, that would be my second choice, I guess, after a winning powerball ticket. During that period, the nymphs start migrating toward the shallows. They must know how to recognize willow roots somehow, because they congregate there in great masses, clinging to underwater willow roots in huge bunches like handfulls of insectivorous grapes.

I like to fish two nymphs simultaneously. Why not? If you do fish two or more flies, you will always catch the most fish on the end fly. But at the end of the day, if you have caught a half a dozen fish on the second fly, well, those are bonus fish. I don't like droppers, so--to fish more than one nymph at a time--I attach the tippet attached to the end fly to the bend of the hook in front. Use split shot and fish a tight straight line, so you can feel the strikes. Fish the slack water at the tip ends of the islands, where two currents come together. Fish the drift lines at the edge of any fast, deep run, where the still water along the edge meets the swifter, often un-fishable current of main river. And never pass up an opportunity to fish a riffle corner, where a shallow, pebbly, boat bumping riffle drains down into a deeper water.

Traditional nymphs include Bitch Creeks, Montana Nymphs, Woolly Worms and anything else that looks like a 1-1/2" long black tube with six thick, crooked black legs at the front end. I like Marshmallow Nymphs the best.

When fishing dry flies, don't be afraid to twitch your fly a little. Adult salmon flies are out of short lived element in the water, and they do flail around with a great commotion when the fall into the river. In fact I think twitching the fly is an important part of ate adult salmon fly presentation. I like to make my salmon flies with foam bodies and rubber legs. Ruibber legs exaggerate teh animated struggling impresson of a drowing fly while the foam body keeps the whole thing afloat, regarless how water logged it becomes. Traditional flies include Sofa Pillows, Bird's Stonefly, Stimulators. No one fishes Bunyan Bugs anymore, except perhaps for me. Bunyan Bugs date back to the turn of the century here in Montana...perhaps even earlier. Bunyan bugs are small wooden plugs, outfitted with horse hair wings and hand painted bodies. It was on a Bunyan Bug that Brad Pit caught his huge (hatchery) fish in "A River Runs Through It." I had the Bunyan Bug in mind when I devised the foam bodies Bunyan Bug.

The most deadly technique of all, during the peak of the hatch, especially in the Big Hole, is to float the river in a boat, sharing duty on the oars with someone who knows the river and knows how to row, while fishing dry flies and nymphs simultaneously,...where the dry fly adult serves as a strike indicator (that catches fish) for one or more large pteronarcys nymph. The only way to make this approach practicle is make the dry fly adult imitation out of closed cell foam, so it has enough bouyancy to stay afloat, even in fast water, even when attached to one or two large, moderately weighted, succulent stonefly nymphs.
Slideshow