When I was a boy, when I first read "Matching the Hatch" by Ernie Schwiebert and "Trout Streams" by Paul Needham, I got excited. Secret scientific knowledge about fish behavior and innovative fly tying was about to put me into more fish than I could ever imagine. I was sure of it. Paul Needham's revelation that trout take nearly all their food in the form of riffle bottom nymphs was the key. My logic was self evident. If trout took ten nymphs for every top water adult, all I had to do was invent the right nymphs, specialize in fishing near the bottom, and I would catch ten times as many fish!

Now that I look back on it, now nearly 50 years later, I'm not so sure I was that far wrong. The best fishermen I know are nymph fishing masters who fish upstream with a weighted leader and a tight straight line, who set the hook frequently, testing each bump, nudge and wiggle along the bottom with a sharp, quick twitch of the rod tip. Until recently, I had nearly given up on my early faith in the power of creative fly tying. My long time fishing friend Patrick--who has out fished me consistently and continuously for fifteen years--relies almost entirely on a small repertoire of traditional nymphs, including the George's Brown Stone, Montana Nymph, Bitch Creek, Hare's Ear, Latex Caddis, Zug Bug and just a few others.

What I hadn't foreseen as a boy was how hard it is to detect the barely perceptible taps of the curious trout that sucks in a drifting nymph, and then spits it out again in the blink of a frog's eye. Nymph fishermen do indeed get many more strikes than dry fly fishermen--but most of us never even realize it! The latest fishing tackle, the hottest flies and valuable streamside experience are available to all of us who work at it and seek it out. But what sets the very best nymph fishermen apart is what's hardest to come by: the lightning quick reflexes and the predatory eyes, ears and instincts of the hunter. Some fishermen have it, and some don't. Until recently I was resigned to leaving it at that. But that was before I discovered Marshmallow Nymphs--before I so suddenly pulled even with my friend Patrick, after a decade and a half of lopsided competition, and started catching many more fish than ever before.

The secret to the Marshmallow Nymph is not appearance so much as texture. Marshmallow Nymphs are made from soft, spongy open cell foam. They look and feel so much like the real thing that trout don't spit them out right away. When fishing with soft bodied nymphs, I often find myself pulling my line out of the water in casual preparation for another cast only to find a determined and totally unexpected trout still clinging to the soft, lively nymph at the end of my line. On other occasions, I have many times watched my leader zigzag slowly off through the current, even though I hadn't felt the slightest trace of a strike. In thirty years of fly fishing, I have never seen that before!

As is so often the case with valuable inventions, I discovered the Marshmallow Nymph largely by accident. I had an idea to create a series of nymphs with closed cell foam. A slightly buoyant nymph--pulling upwards against a weighted leader--would keep a tighter line, I thought. It would be easier to feel the elusive strikes of the riffle bottom feeder. But closed cell nymphs turned out to be too hard to sink. As an after thought, I tried making a few nymphs with open cell foam. And the results were spectacular.

Unweighted open cell nymphs quickly become saturated with water, adopting a natural, freely drifting neutral buoyancy. But there are a lot of good looking nymphs around. The real difference happens after the strike. At the moment when most flies are quickly and unceremoniously rejected--with a quick pooch of a finny mouth--Marshmallow nymphs seem to trigger a short period of chewing and tugging: just what the uncertain and heavy handed nympher needs.

The materials and tying techniques for Marshmallow Nymphs may be new and different, but the fishing techniques don't change at all. I try not to cast too far out when fishing with nymphs. If I see a good holding lie fifty or sixty feet away, I'd rather make a series of 25' to 35' casts in the intermediate water first, while gradually wading up to the better water. I'll make a long cast if I have to, or even just for the fun of it sometimes. But I don't often catch much beyond forty or fifty feet, even when I'm fishing with Marshmallows. Long casts are for dry flies and streamers, but not for nymphs. I try to strike a balance between a tight, straight line and a natural dead drift, but I do lean heavily toward the tight line end of the spectrum, and I set the hook frequently.

As a fishing guide, I spend a lot of time showing beginning nymph fishermen the ropes. And the first thing I work on is setting the hook more often. Beginners often seem to think they've made a mistake if they set the hook, and it turns out nothing was there. Nymph fishing into the watery unknown is like a series of questions locked in the infinite loop of a computer program: "Is it a strike? Is it a strike? Is it a strike? ..." There's only one way to find out. You have to set the hook. Sometimes you catch a fish by accident. That's happened to all of us at one time or another. But if you're lucky enough to feel a strike first, when you feel that unmistakable double or triple tug on the end of your line, even the experts react more quickly. And that's why Marshmallow Nymphs work so much better than any other nymph I've ever fished with; with Marshmallows, you may not be getting anymore strikes than you would, say on a Hare's Ear or a George's Brown Stone, but you'll definitely feel more of them happen! 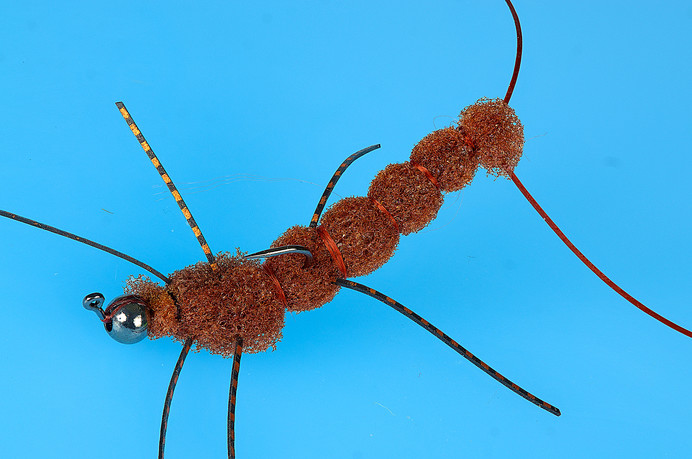