The biggest trout I caught on a dry fly took a foam salmon fly adult. I was guiding a couple from Denver in the early 1990s, an emergency room doctor and his new wife of only a few months, who was a ski instructor. She'd never fished before. The Yellowstone was blown out so we went to the mouth of the canyon on the Gallatin. The salmon flies had been through maybe ten days before. The water was brown and still dangerously high. But fishable.

I was trying to show her (Julie, I think) how to fish a foam adult with a big nymph trailing off the bend of the dry fly hook. I made one cast right up against the bank. In shallow water. A half a second after the flies hit the water the adult disappeared with a sound like a brick hitting the water. The fish took off and then got his head stuck behind a rock, or so I thought--just like a rookie--because I flat out couldn't move the fish. And then it took off. I was damn near spooled and the fish was already out in the middle of big heavy brown mid-river waves. I jumped in. Swam with one arm. Got maybe 150 yards down river and looked around. Julie was right behind me, breast stroking like the athlete she was, with a huge grin on her wet face. I worked the fish over to some shallow water. Measured him at 24". What a fish. But length wasn't the real story. That fish was hog fat. Looked like he had a softball buried in his gut. He was a hump shouldered male with a long snout and a kipe as long as a finger.

I didn't want to spoil the moment by complaining about no camera. When I let him go his teeth ripped my thumb like a straight razor. Julie said: "Oh my god. I do have a camera. Right here in my backpack." 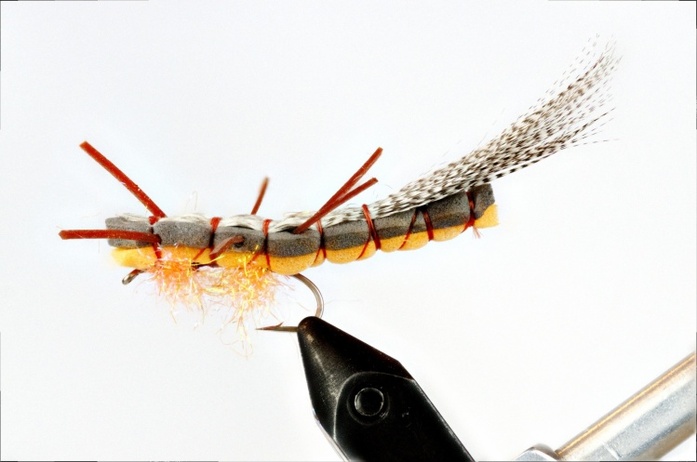 
A moment after that Chuck Tuschmidt drifted by in a raft. Chucky still talks about that day. About finding us both soaking wet. Me with a blood streaming thumb and both of us grinning like we'd just won the lottery. I've caught bigger fish on streamers. But that was a lifetime best on a dry fly.