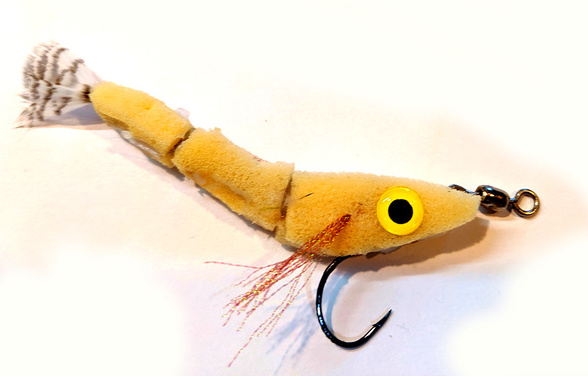 1994 Never published.....still for sale for that matter


The Twinkie as shown below has to be a strong contender for the ugliest fly contest. But it's interesting because it is in fact a powerful fish catching fly. Fishermen (me included) are drawn to handsome flies. Fish, on the other hand, seem to be drawn by other cues. The Twinkie attracts first strikes with the best fo them. It also triggers second third and even fourth strikes, often followed by subsequent carrying and chewing behavior. And that is special stuff.

"So how was it," asked Mike Kelly as he helped Randy and me load my boat. Mike was a fishing guide and so were Randy Berry and I. But Mike had been with clients that day while Randy and I were taking a busman's holiday: floating and fishing Montana's Big Horn River by ourselves. It was the end of long windy day on the river. A wide band of glowing orange light was gaining strength over the Pryor Mountains in the western sky. We were tired, sticky-eyed and hungry. "It was pretty slow this morning," I heard Randy say as I cranked the winch handle on my boat trailer. "They wouldn't look up at anything. So we fished little stuff deep and we got into'em pretty good." Randy glanced over his shoulder for a moment, grinned sheepishly and said: "And then we tried tossing these big foam minnows Sandy's been tying and we really got into'em for a while."

"Yeah, just mattress foam and few feathers...I kid you not," shrugged Randy while gesturing with his rod tip. Mike snatched Randy's line out of the air and ran his hand down the leader until a gloppy-wet blob of tan colored foam and white marabou appeared in the palm of his hand. Mike knitted his brow, glanced briefly at both of us and said: "You gotta be kidding!"

It all started early that morning at the after bay fishing access near Fort Smith Montana. Randy, who had been a Big Horn fishing guide ever since the river re-opened to public fishing in 1979, had been telling me about the Big Horn for years. He wanted to get an early start. The top of a fuzzy red sun was just crowning a ridge over by Crow Agency in the Eastern Sky. An early morning fog still hovered over the water but it was dissipating fast as a sharp gusty wind was punching down out of the Big Horn canyon to the south, pushing streaks of high flying mallards like blowing leaves in an autumn sky. It felt more like October than June. I heard the hollow splash plop thud of waves against the side of my driftboat as we pushed off into the misty currents. "They'll be looking up soon," predicted Randy. "You'll start to see pods of rainbows cruising the slack water pockets, rolling on nymphs, picking off midges. This is tail-water fishing!" expounded Randy as he dropped the oars and spread his arms. "You'll never see anything like this on the Yellowstone."

An hour or so later--when we still hadn't caught a fish--I found myself thinking I had indeed seen this kind of fishing before. Randy announced it was time to change tactics. "They don't always look up when it's windy like this," he explained. "We'd better try looking a little deeper." Randy rigged us both up with split shot on an extra-long leader, about 12-14" up from a tiny flashback nymph of some kind. We anchored up at the head of a side channel where the river split left and west around a brush covered island about a mile upstream from the Three Mile Fishing Access. I watched Randy hold his rod tip high overhead, keeping as much fly line off the water as possible. He twitched the rod once or twice--to test the feel of the line--and then boom, he had one hooked on the very first cast. I fell in below him a little further downstream. I caught a fat rainbow myself on the second or third cast.

We never did find any fish any where near the surface that day, but the deep water nymph fishing was excellent. We caught fish every time we parked the boat and waded the river, dead drifting nymphs through the riffles and drift lines. It's not easy to fish deep with small nymphs from a moving boat however, and we knew we had to make some progress down the river or it would be long after dark by the time we made the Big Horn fishing access, 14 miles downstream from the afterbay dam. I had noticed too that each time we passed through the tail end of a large pool there would be a fan shaped band of clean weed free gravel where the flat water at the tail end of the pool met the faster riffle water the head of the next run. And sitting on that clear clean gravel, like dolphins riding the bow wave in front of fast moving boat, where shifting schools of large, very active brown trout. There had to be way to catch those fish. I had an idea about an experimental fly I had been working on. Without saying anything to Randy I tied on a large soft-bodied foam streamer as we pulled out into the current again. I made a quick short cast with the foam fly. I laid it down right on the bank below some overhanging willow roots. I watched a long dark streak emerge from the weeds along the bank. Randy was still working hard on the oars, trying to get the boat under control as we pulled out into the faster water. The Big Horn water was so clear I could see the fish's jaws open as he swirled sideways on the fat, soft streamer. I could see his jaws still working--like an Atlantic City tourist chewing on a mouthful of salt water toffee--as he turned and ran back toward the bank. I set the hook hard and let out a war whoop as I felt the fish of the day throbbing at the end of my line. That was the first fish we'd caught from the moving boat all day. In another dozen casts I boated another 2-3 fish while Randy pulled on the oars. Casting a big water-logged foam fly took some effort. I found myself using an exaggerated, slow motion double haul that occasionally splattered me with a mist of water as I made my backcast. But I was getting plenty of strikes, and I was getting plenty of second and third strikes too. Randy was beginning to notice--big time--and he wanted me to take a turn at the oars.

I handed Randy the rod and took over the oars just as we rounded a corner where the river bent sharply to the north and east in front of a large vertical cliff of loose gray shale. Randy made his first cast as we rounded the corner: into a swampy backwater just upstream of the cliff wall. His line straightened out nicely about 12" above the water, shuddered momentarily and then plopped the surface of the still backwater, just to the left of some emerald-green early summer cattails. A long dark shadow followed his fly as it swung out into the current. I took my eyes off the action and pulled hard on the oars to avoid washing sideways into the rocks at the base of the cliff. I heard Randy yell out load: "Did you see that? That was a biiiiig fish!" he said. "He followed it, he, he...hey he's still got it!" I got the boat under control and turned my head just in time to see Randy desperately jerking in arm lengths of slack line. I saw the fish too--just as it seemed to see us. The big fish turned and ran with an adrenaline swirl. A shadow caught my eye. I looked up and saw a pair of golden eagles soaring overhead. Randy finally got the hook set and grinned at me as the fly line started hissing out through his fingers. "I thought he was just following it," he said. "But he had it in his mouth the whole time. You could see his mouth working on it. You could see him chewing on that fly!"

It kept up that way for the rest of the day. We never did see any rising fish. It was just too windy. But we spanked'em with tiny nymphs, fished deep, every time we parked the boat. And we nailed one big fish after another with the big foam streamer as we drifted by the juiciest banks and backwaters. We even managed to catch one or two of the fast moving brown trout at the tail ends of the pools. Mike didn't have any trouble with our story about the nymph fishing, but he was having a very hard time believing what Randy had just told him about the wet foam fly he was still looking at. "I'll believe that when I see it," said Mike with big Montana grin.
Slideshow