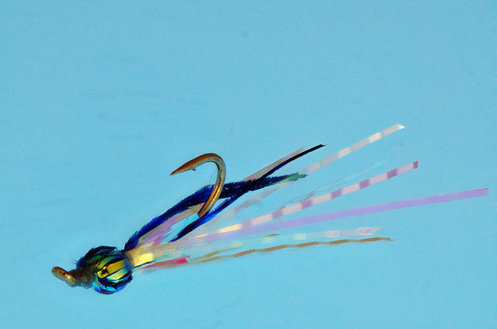 
"Aren't there any good sculpin patterns that don't have the deer hair head," I asked? "You bet," said George Kelly. "I've got one I call the Foxy Lady and I really believe in it. Come over here, I want to show you something." I was talking to George Kelly in the showroom of the former Beaver Pond sports center in Bozeman, Montana. The Beaver Pond had a big fiberglass fish tank near the front entrance of the store that was stocked with an impressive menagerie of wild Montana fish. There were several good sized rainbows, a grayling, a pair of whitefish and a mean looking twenty-four or twenty-fiver inch brown trout that was the undisputed heavyweight champion of the tank. George was grinning at me and beckoning me over toward the tank. "Look at this, " he said.

George's fly was a yellow-bellied, fuzzy-hackled thing with a long sensuous strip off fox fur tied over the back. It was the spring of 1976 and I had never seen a fur-strip streamer before. It looked pretty wild. I watched closely as he tied the Foxy Lady onto a short length of leader and tossed it into a froth of air bubbles on the far side of the tank. "Look at that fox fur move," said George. "I'm absolutely convinced that action just drives'em wild. And without the deer hair head, it's easier to sink than a Muddler."

George was and sill is one of the best river guides her in Montana, and I was impressed. I was just about to say something about the sexy, undulating action of the fox fur when the big brown trout darted out from his sanctuary under the air bubbles and swirled on the Foxy lady like an angry shark. He didn't actually bite the fly, but he swatted it hard with his tail, knocking the fly clear out of the tank. The Foxy Lady landed with a wet splat on the aquamarine rim of the fish tank about a foot away from where I was standing.

It was too much for me. I bought two or three patches of fox fur, tied up a new arsenal of Foxy Ladies and headed off on a a ten year binge of fur-strip streamer fishing I am just now starting to see from a different perspective. I like streamer fishing. It's a quick, fast-paced form of fly fishing that suites my impatient temperament. And I like the larger class of fish you catch with streamers. But after ten years of trying I have to admit it: fur-strip steamers may be a little easier to sink than Muddlers, but not much easier. I still think the pulsing, rippling action of a fur-strip fly is an important piscatorial eye catcher, but more important than action I now believe, is
how deep you fish a streamer fly and how quickly you get it there.

Thick matted strips of fur aren't actually buoyant, they way deer hair Muddlers are, but they still aren't very easy to sink. The soft flexible action of thousands of undulating fur fibers creates a great deal of turbulence or "hydrodynamic drag" that, like a miniature sea anchor, slows down and deadens the overall movement of the fly. If you've ever tried to dry out a pair of wet blue jeans by holding them out the window of your car while zooming down the highway you'll know what I'm talking about. To design a steamer fly that really sinks well, it turns out you have to avoid turbulence as well as buoyancy. The deepest diving, quickest sinking flies I've been able to make so afar have all been made with a few sparse feathers and with slick, slippery synthetic fibers. The slippery nature of plastic is the main reason it sinks so well. Just like the highly polished bottom of a surfboard or a fiberglass racing boat, slick plastic creates very little hydrodynamic drag.

I remember an early March trip over to Livingston to fish the O'Hair stretch of Armstrong spring creek. Snow flies--or midges--and a generic assortment of small nymphs are the standard winter flies here in Montana. But the winter was unusually mild that year and the warm, window spring weather had come several weeks ahead of schedule. The rainbows wouldn't actually be spawning for another month or so, but we thought we might catch a few on egg flies anyway. What the hell. After surviving another Montana winter the first fishing trip of the
year is a celebration--the fishing doesn't have to be good.

My father my wife Adele and our family doctor Doug and I packed up a cooler full of sandwiches and coffee and headed over the Bozeman pass toward Livingston late that morning. By the time we had paid our rod fees rigged up our rods an slipped into our waders the wind was really starting blow. I rigged up a with a rod with a pair of Copper Nymphs and headed down to the warming shed to wait for the others. I found a subdued and wind-weary Victor Colvard sitting at one of the picnic tables. Victor was holding his hat on his head with one hand while working on a steaming cup of coffee with the other. Victor is a fishing guide, a connoisseur of wooden riverboats and one of Montana's most notorious fishing bums. He wasn't encouraging.

"We've been here since about nine," Victor said, with a squinting, stickey-eyed look. "We've caught a few," he said. "But you really have to work for them." "Try any egg patterns," I asked? "Not me," said Victor. "I never use'em. At least not in public. This wind is too much for me," he added. "I think we'll head over to Fort Smith tomorrow and give the banana belt (the Big Horn) at try."
"Well good luck," I said.

The wind was grim. It was pulling so hard on your line you couldn't feel a strike even if you got one. To see a fish strike seemed like the only chance to actually hook one. I heard Doug bellowing from way upstream. He was up above the wooden bridge, past the lambing sheds, yelling for the rest of us to join him at the source pool, where the spring water bubbles up out of the ground and cascades over a swampy embankment into a frothy spring creek pool. Doug had spotted a big fish finning in an eddy at the edge of the foam on the far side of the pool. And he wanted Adele to have a first crack at the fish. It was a nice gesture.

Adele waded out about two steps into the creek and started false casting a Copper Nymph in the general direction of the big fish. It was a tough cast because of thick willows at our backs, Adele finally got a good drift on her third or fourth cast. The big fish broke away from his holding spot and drifted slowly downstream a few feet to look at her fly. Then he bolted back upstream with a powerful flick of his tail. It looked like a big brown, but it was hard to tell. The low, late winter sun was peaking through the fast moving clouds and glancing off the water with a terrible glare. Adele soon tired of the hunt and Doug stepped in to take her place, drifting his fly past the big trout with a casting skill that can only come from years of experience.

The big trout held his ground. I got the feeling he was actually getting annoyed at this point. The big fish flexed the length of his body, like a slow moving snake, and casually moved over sideways two or three inches to avoid getting snagged on Doug's drifting nymph. "That was a pretty conclusive rejection," Doug said. "That fish has been around for a while," he added. Doug winked at Adele and looked at me with a conspiratorial grin. "I think it's your turn now," he said while looking straight at me. "And worms aren't allowed."

With a feigned look of confidence, I quickly tied on a big Sockeye Shiner, raised my eyebrows, lowered my chin and looked over in Doug's direction. But I didn't say anything. My first cast missed its mark by a several feet. The wind was horrendous. I made another cast with a little more muscle on it and shot the shinny streamer all the way out to the edge of the froth, only inches away form where we had last seen the big fish. I mended my line, twitched the rod tip a few times and boom: the big brown trout shot darted out from underneath the foam and pounced on the Sockeye Shiner like Hulk Hogan in a tag team match at Madison Square Garden.

It was a street fight from the first moment. I hadn't come prepared to fish streamers...I had on a pretty light leader. I had to give him all the line he wanted. I pointed the rod at the fish and hoped for the best as he thrashed his head from side to side and drifted downstream. I never would have stopped him if he had continued on downstream, but he suddenly reversed himself and headed back upstream for the security of the foam at the head of the pool. He quickly tired and I gradually brought him to the net. He as no trophy, but he was a strong nineteen inches long and I never felt more victorious. It took a supreme effort on my part to hide my exicement. It was a long time before Doug said anything. I was stroking the fishes gills, getting ready to release him when Doug shook his head and,
with a wry expression said,

"You'll have to show me how to make those things when we get home!"