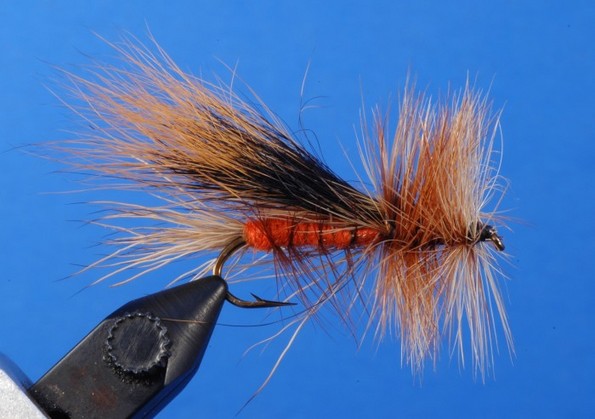 I got email from someone in Japan a few days ago who asked about Pat Barnes and the Sofa Pillow. The writer wanted to now if I knew anything about the origin of the Sofa Pillow name. Before I could answer, I lost the email--and his return address. Perhaps the writer will try again. I put this page together because of that lost email (I was rebuilding my computer.....and stuff happens)

I knew Pat, sort of. Pat and my father Colin were good buddies. My father liked to say that Pat was such a good friend he felt free to fish, even when Colin had paid for a guiding fee. Pat loved to tell the story of the day Colin and I had floated and fished the lower Madison with Paul Roos (Pat's head guide in those days) and then tried to have an 'all you could eat stew' at a West Yellowstone restaurant later that evening. My father stormed back into the kitchen at one point. Colin complained he'd spent all day fishing on the river, and now they wanted him to fish for non-existant beef in the stew.

I fished with Pat several times in the 1980's, long after Pat had retired. Pat stayed close his Helena MT home in those days and fished the Missouri, below Wolf Creek, as much as he could. Pat loved to fish and to tie flies, and he never lost his enthusiasm. He rowed his old Keith Steele driftboat well into his 80's. On one such day, when I took Pat fishing in one of my own boats, Pat had just invented a new marabou streamer fly he called the Scud. He said he looked the word Scud up in a dictionary, and saw that it meant a cloud of some kind and, because his new marabou streamer looked like a fuzzy-gray cloud, he named it the Scud.

We put my boat in at, well, on the Missouri, and headed off down the river.
Pat insisted on taking the oars from the getgo. And he insisted I fish with his new creation the Scud. I caught a small brown trout up against a rock wall, across from the put in, almost right away, and then struggled for a while. At one point, when Pat wasn't looking, I put on a streamer of my own, one I called the Knucklehead Sculpin. Two or three casts later I hooked a beautiful, well-developed male brown trout about 17" long. Pat was beaming from ear to ear as he reached out across the gunwale to net the fish that had--he thought--taken his new Scud. But when he saw the fish and a strange, olive-green, tinsley creation in its mouth, he frowned disgustedly and said "the fishing must really be good today!"

On another such Missouri River float trip--with Pat and my old friend John Wilson--I remember thinking Pat must be old and lazy because I had never seen anyone cast so casually: allowing so many loops and squiggles in his fly line as it fell down onto the water. It wasn't until that trip was half finished before John and I realized Pat knew exactly what he was doing. All those squiggles in his fly line allowed him to get extra-long drag-free floats with his dry fly. And when a fish took the fly he set the hook with a sharp, quick, sideways and backhand (not upward) twitch of the rod tip. Flipping the rod tip that way pulled the line through the water just hard enough to set the hook, regardless how many loops and squiggles he had in his line.

He knew the water well, pointing out all the not-so-obvious rainbow riffles as we drifted by, and he took time to flip a streamer back into all the slack-water lagoons along the lower stretches of the river. "Slack water and side channels," he said, "are where the really big brown trout are."

The Sofa Pillow? I remember reading somewhere that the Sofa Pillow got its name from an amused friend who remarked "that fly is as big as a sofa pillow." I guess that's how the House and Lot got its name too, and its derivative: the H&L Variant.

I've got a few more Pat Barnes stories I'll add some other evening. In the mean time, note that all of the fly photos in this collection (with the exception of the Knucklehead Sculpin) were taken from flies Pat actually tied. I asked him for some flies once, several years before he died. He put these few in a box and had his wife Sig send them to me. Some of these flies still had bits of leader tag* tied to the eye of the hook. So I think these flies just came out of his fly box. Sig did assure me that Pat had actually tied these flies...that they weren't her own creations. Not that it would have mattered. Sig was a master tier herself. But for Sig fly tying was a job. For Pat it was a passion.

* one minor but interesting thing I noticed about the clipped leader tags I found in some of Pat's flies--at least from the dozen or so Pat sent me--Pat used the Turtle knot to attach his flies to the tippet.
Slideshow
Barnes-obituary.htm
index.htm
Terry-Sanderson.htm
Sandy.htm